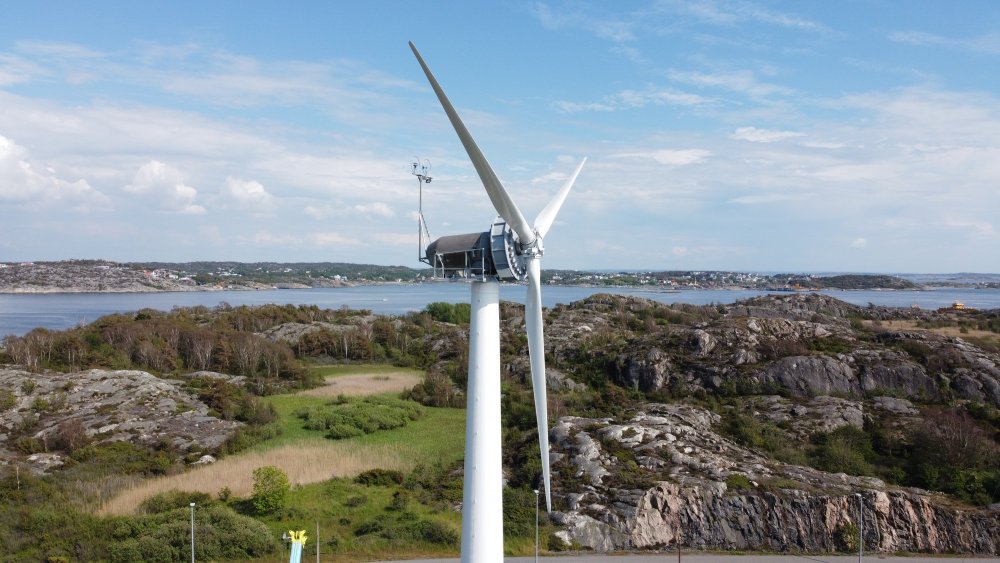 Wood technology company Modvion has brought wood construction to the wind power industry. After erecting their first wooden wind turbine tower on the island of Björkö in the Gothenburg archipelago, they’re now bracing themselves to compete with steel. Lightweighting in infrastructure and energy was one of the four themes at LIGHTer’s International Conference on 6 April. "We usually call this material nature’s own carbon fibre,” says Otto Lundman, CEO of Modvion.

Modvion has brought to market wind towers that are built using a special engineered wood product called laminated veneer lumber. The tower section of the wind turbine is built using wooden modules that are installed right on site. The components that need to be assembled are significantly smaller than the tubular steel otherwise commonly used in such towers. This makes them much easier to transport than their steel counterparts.

“If you’re going to build wind towers that are taller than 100 metres, it’s difficult to transport the steel tubing, which you will then need a lot of,” says Otto Lundman, CEO of Modvion. “When they built a wind farm outside Mariestad, they had to transport the sections there by ship and then build a completely new road along the fields just for them.”

The idea to start up the company germinated during the master’s programme “Entrepreneurial School” at Chalmers University of Technology. The company has been around since 2016, and the wind farm at Björkö is its first project.

Wind turbines are growing taller and taller
The wind turbine on Björkö is 30 metres high – a height commonly built to about 25 years ago. But the model that Modvion wants to bring to market is 150 metres high (to the centre of the hub), indicating a clear trend towards increasingly taller wind turbines.
“This will go on for some time,” Lundman says. “The bigger they are, the fewer they are and the lower the cost of electricity. Sometimes there are constraints, like transportability, that put the brakes on how big they can get. So that’s why we build using modules,” he says.

But by far the most important argument for building in wood, Modvion argues, is climate performance.

Another way to illustrate a conventional wind farm’s carbon footprint from the steel it uses is that the entire first year in operation is “spent” on compensating for the emissions generated during construction. A Modvion tower typically weighs two-thirds less than a corresponding steel tower, thanks to the 55 percent higher strength-to-weight ratio. Besides the weight and sustainability arguments, another argument speaks to building in wood – the price.

“Once we’ve reached serial production, we’ll be able to manufacture at a lower cost than for steel towers. And that’s without including carbon prices such as taxes, costs for emission allowances and the like.”

According to Modvion’s plans, the first full-size wind turbines will be built in the summer of 2022.
“We’re now putting together a production line that can produce towers on a commercial scale,” Lundman says. “We’re talking about 10-20 towers a year during the first few years, and hundreds of towers annually with the next factory,” he says.

Can wood withstand the stresses of a wind turbine?
“Yes, it’s just a matter of dimensioning them to meet the requirements. Wind turbines usually have a lifespan of 20-25 years. Ours are designed for more than 25 years. People aren’t used to seeing larger structures in wood. Most people think of homes when they think of wood, but that’s not the kind of structure we’re producing. We use laminated veneer lumber – we call it nature’s own carbon fibre.”

Why haven’t wooden wind turbines been built before?
“There was one installed outside Hanover. In essence, there are two reasons: The manufacturing technology for the materials we use has progressed enormously. Then you have to be able to calculate the strength. With steel, it’s easier to figure out how it behaves. Our material’s strength used to be trickier to calculate, but today you’ve got computing power in every laptop.”

Theme: Lightweighting in infrastructure and energy
Lightweight solutions in the construction, energy and infrastructure industries save energy as well as materials. They enable simpler technical solutions with less environmental impact, both locally and globally. The design possibilities are expanding while operating costs are falling. A major focus of lightweighting is on reducing the use of virgin material through circular material flows.